I’ll have more to say over the next couple of days about the latest report on the S&P Case-Shiller Index, but I just want to offer a quick note this morning.

First, this article appeared in the Austin American-Statesman this morning:

The article notes that only one city in Texas — Dallas — is among the twenty used in the index, and that they saw a year-to-year decline in home prices in December 2010.  Most of the other indexed cities suffered tremendous declines in prices over the past couple of years, so seeing them recovering is great news — for them and for the country.

The price decline in Dallas, however, should not be over-interpreted.  The fact is that home values in Texas have remained relatively stable during the recession, so occasional adjustments are not surprising.

So, how does the Austin/Central Texas real estate market compare?  We also saw a year-to-year price decline in December — about 2%.  As always, context matters.  This chart shows monthly average sale prices over the past six years, the 3-month rolling average, and the 12-month rolling average, which filters out seasonality and the extraordinary effects of temporary tax incentives, etc.: 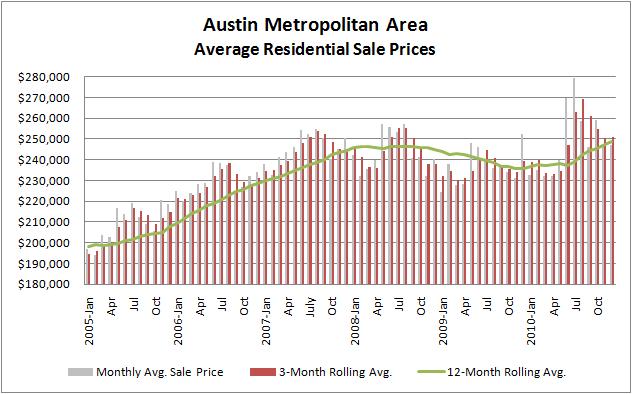 You can see that the average sale price in December 2010 was slightly below December 2009, but look at the magnitude of the price spike we saw at the end of 2009!  A small decline in comparison really isn’t disappointing.

You can also see the huge changes in average prices in the middle of 2010, largely driven by the homebuyer tax credit program that expired on June 30.  We have since come down from those highs, too, but the important feature of this chart is this:

INCREASED  in twelve of the last thirteen months!

That average set another ALL-TIME HIGH in December 2010!

Now that final data for December is in, I will update my Austin Market Dashboard and offer more extensive comments.  For now, I just want to congratulate the cities that have suffered most during this recession, and wish them well in 2011.  I also want to reassure my readers that Texas and Austin real estate are alive and well, and looking forward to continued improvement this year.

Many years of business experience (high tech, client service, business organization and start-up, including 18 years in real estate) tell me that service is the key to success and I look forward to serving you. I represent both buyers and sellers throughout the Austin metropolitan area, which means first-hand market knowledge is brought to bear on serving your needs. Learn more about my background and experience, my commitment to my clients, my profession, and to the real estate industry at CentralTexasHomeSearch.com.
View all posts by Bill Morris, Realtor »
« Employment growth continues
Growth and employment in Austin »