How’s the market in your part of town?

This morning I posted an article on AustinMarketInfo.com containing recommendations from real estate professionals about how to approach buying a home in the current market:

Tips On How Buyers Can Sift through Housing Inventory Effectively and Efficiently
I included it on my website because I agree with most of the recommendations.  However, like much national press these days, buyers and sellers in Austin and Central Texas need to adjust their perspectives in an important regard:
In general, our area has not seen the tremendous inventory build-up, excessive supply of short sales and foreclosures,
or the general decline in property values that other metro areas have experienced.In those hard-hit cities and states, buyers may hold a significant advantage.  That is not necessarily true in Central Texas.
Rather than just describing my opinion about our market, I decided to provide important data so you can make your own  judgements.  (I have written my opinions extensively, so if you’re not so data-oriented please forgive this detailed analysis.)  In all cases, these charts show monthly data from October 2008 to October 2010, for single family homes only.  Click on any chart to open it in a separate window for a closer look.
First, consider the entire Austin Metropolitan area (Travis, Hays, Williamson, Bastrop, and Caldwell counties) 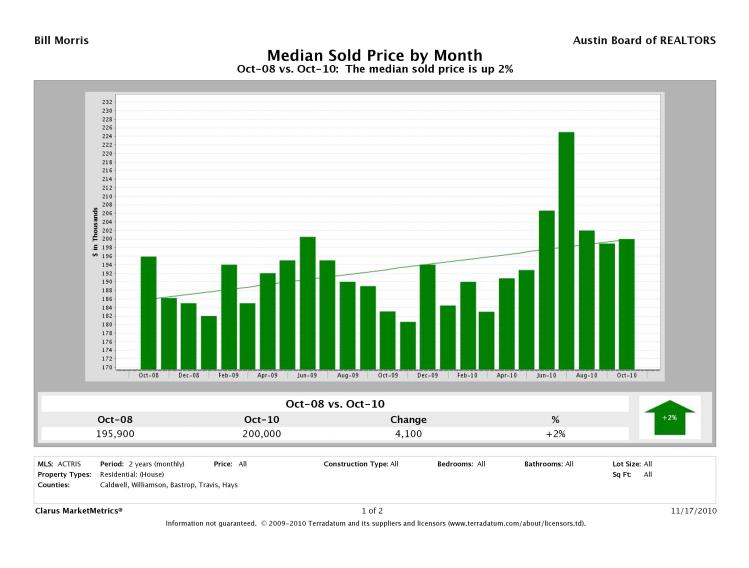 Note the clear trend in median prices over this two year period, and the level of listing inventory in October 2010.  Most analysts consider 6 to 6.5 months of inventory to be a “balanced” market, conditions that don’t strongly favor either buyers or sellers.  You can clearly see the effect of two homebuyer tax credit programs on inventory, but on average this has not been a seriously over-supplied market.  Obviously, at the peak levels of 9 to 9.25 months’ supply conditions favored buyers, but the worst we have seen of  this housing crisis was far better than “typical” conditions over the last two years in California, Nevada, Arizona, Florida, and Michigan.

Now, here’s how different parts of Austin have fared: 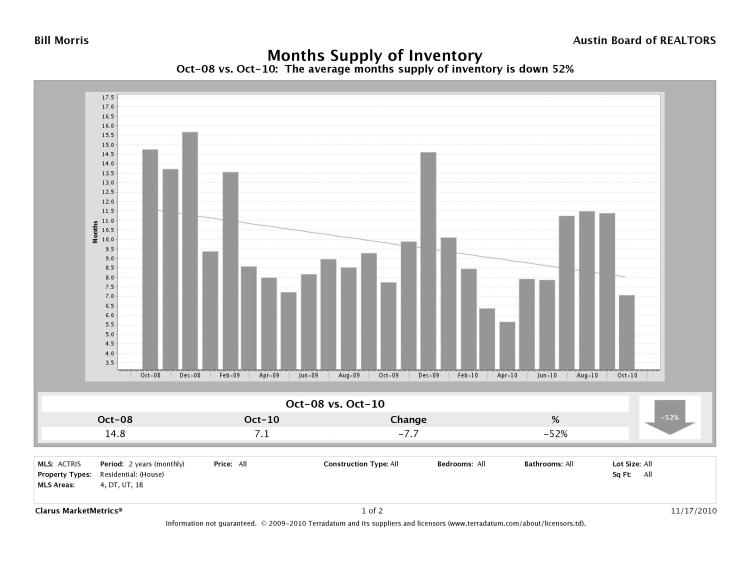 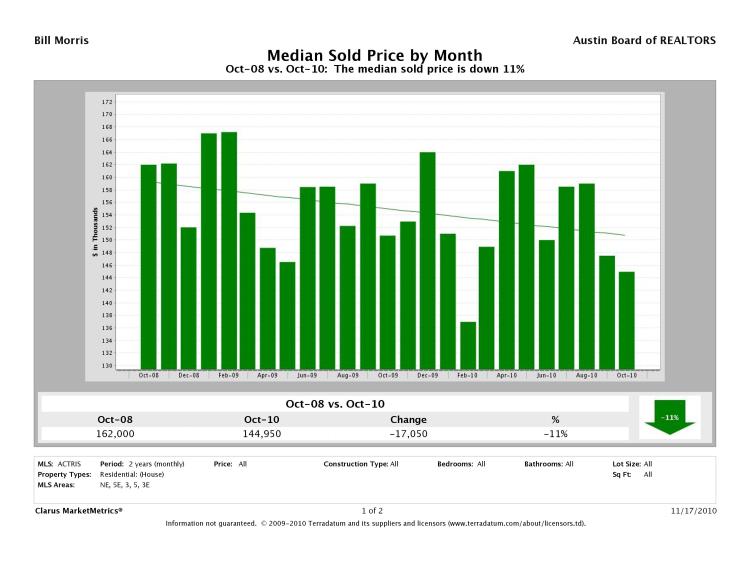 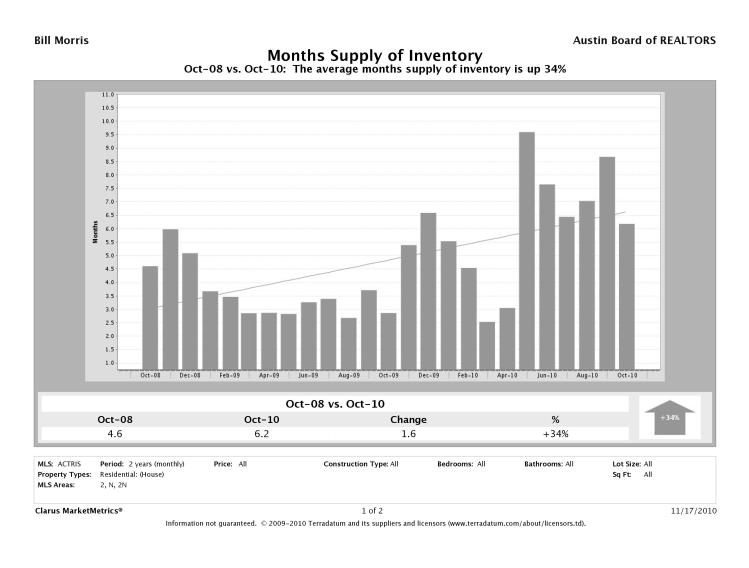 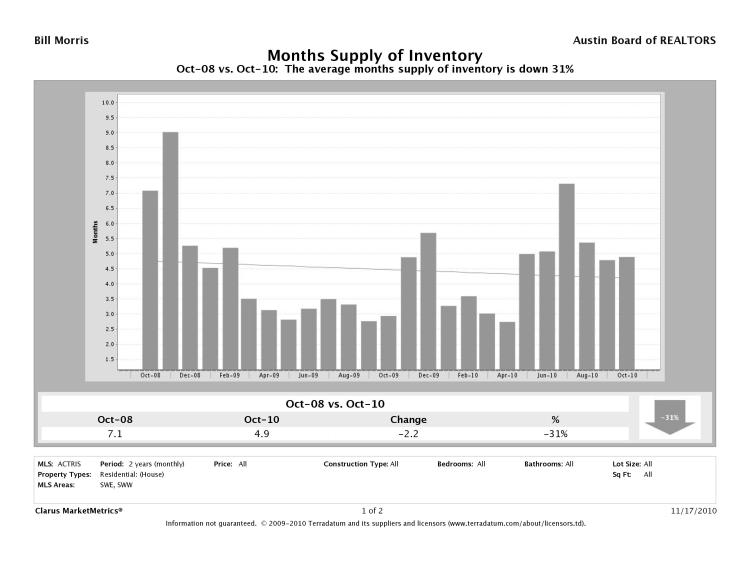 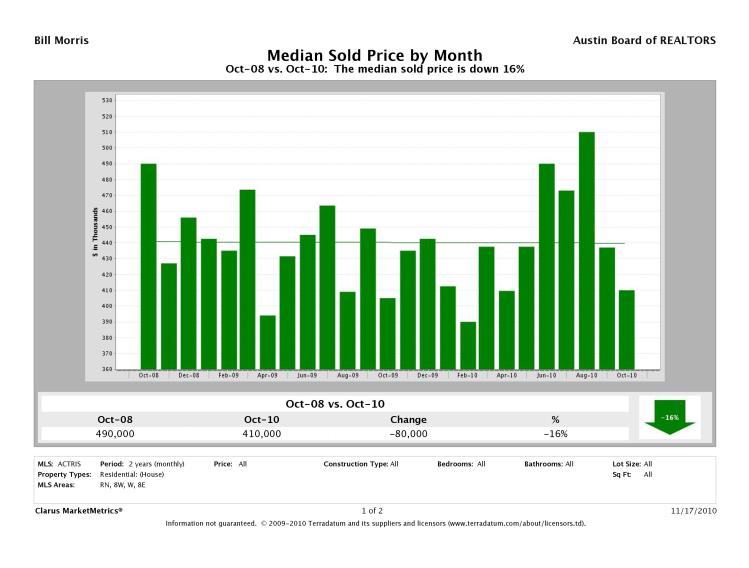 Only East Austin has experienced a general decline in sale prices.  West and Southeast Austin, on average, have been flat over these two years, with noticeable weakness in September and October of 2010.

Notice that I have not addressed suburban cities and towns adjacent to the city of Austin, but they are included in the Austin Metro charts near the top of this post.  For ongoing monthly updates on the status of the Central Texas real estate market, feel free to refer to my Austin Market Dashboard, updated around the 20th of each month with final data for the previous month is released.

As I have pointed out many times, while market averages are useful, they do not substitute for narrowly focused analysis of the value of   specific property that you may consider selling or buying.  In each of the areas included above there are neighborhoods and size/price market segments that are significantly weaker than the averages shown, and other segments that are much stronger.

General economic uncertainty and two rounds of homebuyer tax incentives make all market less predictable this year than most.  We will probably see a few months of seasonal “softness,” but there is no reason to expect a flood of low-priced listings that affect general price levels in the Austin area.  There is every reason to expect both prices and mortgage interest rates to trend upward in coming months.  One of those factors may argue in favor of sellers waiting to enter the market.  The other may influence buyers to accelerate their plans, and sellers who wait may miss “the” buyer for their homes.  The point is that “timing” the market is always difficult, and even more so now.  If you’re thinking of buying or selling residential real estate in the Greater Austin area, consult with a real estate professional sooner rather than later and make your decision based on focused information, not averages or national press reports.

Many years of business experience (high tech, client service, business organization and start-up, including almost 20 years in real estate) tell me that service is the key to success and I look forward to serving you. I represent both buyers and sellers throughout the Austin metropolitan area, which means first-hand market knowledge is brought to bear on serving your needs. Learn more about my background and experience, my commitment to my clients, my profession, and to the real estate industry at CentralTexasHomeSearch.com.
View all posts by Bill Morris, Realtor »
« Credit scores — important information
More dollars, cheaper dollars … good news? »

9 thoughts on “How’s the market in your part of town?”