Calendar year 2017 was unusual — mostly for its similarity to the previous few years in limited residential real estate inventories.  It was the fifth year in a row with housing supply at or below half of what most market economists consider “normal” or “balanced.”  Austinites have come to understand “seller’s market” in a very personal way in this market cycle that has lasted longer than any other, at least over the past 28 years.

To illustrate that, here is a look at market activity since January 1990: 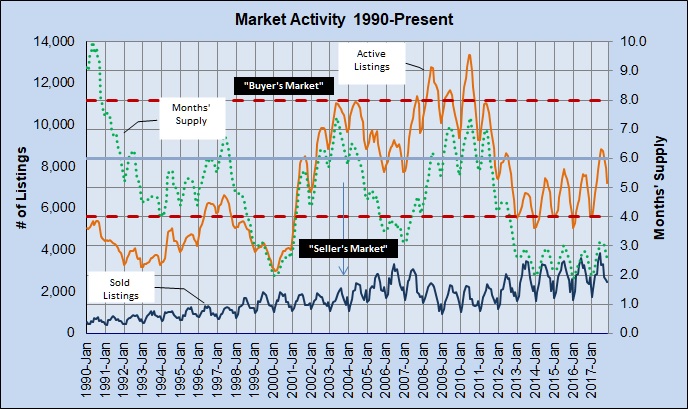 I’ll update that chart and other parts of my “market dashboard” when final December data is available in a few weeks.  For now, I just want to point out the green dotted line — “Months’ Supply.”  Most analysts consider 6 to 6 1/2 months of inventory normal.  Since 2013, the supply in the Austin area has been 3 months or lower — with the exception of June, July, and August 2017, when the supply was 3.1 months.

I began commenting to clients several months ago that the market cycle was showing some signs of maturing, also emphasizing that that did not mean turning to a slow market.  I have seen no indication of any generalized slowing of our residential market, although time on market has gotten a little longer in some market segments over the past year.  There are some issues, though, including a sort of gridlock in resales with sellers wanting to move but frustrated with the difficulty of coordinating a sale and a purchase in an astoundingly fast-paced market.  That undoubtedly has affected how many resale homes are for sale in some areas and price ranges.  I’ll say more about that another time.

Another important factor that has limited housing supply has been access to new construction, and the rising prices of the new homes that have been available.  Using data through November 2017, this chart summarizes building permits issued for single family homes over the past couple of market cycles:

The impact of the 2007-2008 mortgage crisis and the resulting national housing industry issues are apparent, as is the return of growth to the Austin-area in 2012.  Note, however, that even as builders dramatically reduced their activity in 2007 – 2011, the value per unit did not decline very much or for long.  Also note that since 2012 the per-unit value of a permit accelerated, albeit with some moderation over the past couple of years.  The average value of a single family building permit in 2017 was about 34% higher than the 2008 pre-meltdown peak, and about 45% above the 2009 valley.

There have been debates for years about whether rising home prices represent a “bubble” economy in the Austin area.  With rare exception, local market watchers have opined that our growth is based on job creation and genuine demand, not speculation.  Another look at permitting activity appears to support that argument:

The Austin metro population data shown by the orange line is confirmed through 2016.  I extrapolated 2017 growth at the same pace as the previous two years.  There are two important points to make about that chart:

Only in 2016 and 2017 did the growth in permitting activity closely match the slope of population growth.  Permitting is still far behind, though, in catching up with unserved population growth over the past ten years.

Robust home construction making a real contribution to housing supply is an important part of restoring balance to the Austin metro market, and to helping to break the resale gridlock I mentioned earlier.  In the meantime, housing prices and urban sprawl continue to complicate our growth picture.

I am optimistic that progress will continue in 2018, but I remain concerned that there is a limit to what employers and their employees will accept in terms of the total cost of living — housing, commuting, and other infrastructure costs that are all strained by the housing supply imbalance we have experienced for many years.  I’ll keep an eye on additional market signals and offer my thoughts in the coming months and years.

Many years of business experience (high tech, client service, business organization and start-up, including almost 20 years in real estate) tell me that service is the key to success and I look forward to serving you. I represent both buyers and sellers throughout the Austin metropolitan area, which means first-hand market knowledge is brought to bear on serving your needs. Learn more about my background and experience, my commitment to my clients, my profession, and to the real estate industry at CentralTexasHomeSearch.com.
View all posts by Bill Morris, Realtor »
« Market Dashboard – Austin area update
More on Housing Supply and New Construction »