It’s time to comment on updated S&P Case-Shiller home price index data.  As always, the index lags, so the latest data gets us through April 2011.  For this discussion, I have focused on the Case-Shiller 10-City and 20-City indices and how home values have performed there compared to Austin.  In addition, because of a number of recent articles about Washington, D.C. as the best-performing Case-Shiller city (which it is) and as the only U.S. with increasing home values (which it is not), I have added Washington to this month’s comparison.

The Case-Shiller indices have not told a happy story recently, with both the 10-City and the 20-City compilations losing ground steadily since July 2010.  Both stopped their losses in April, but they are now at about the same levels as January 2009: 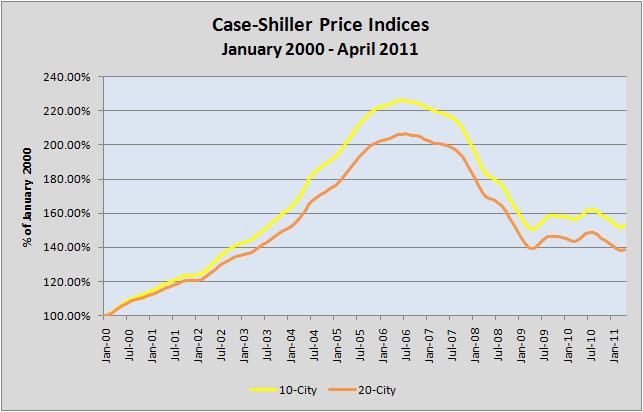 Now, compare those indices with Austin and Washington, DC: 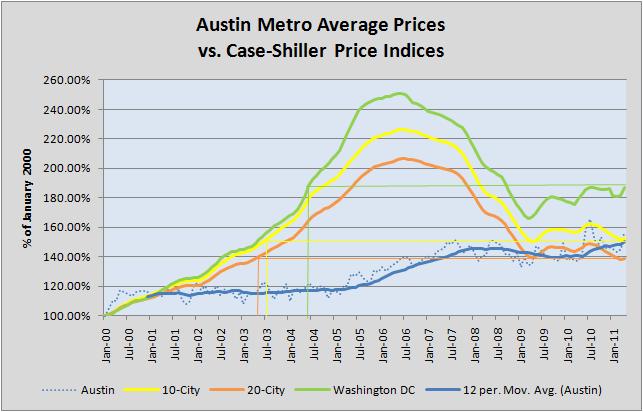 Notice that the mid-decade “bubble” in Washington was even larger than the indices, and home values there fell almost in parallel with the indices.  Washington home values “stabilized” at a higher level than the index cities and is now about the same as in June 2004.  Compare that to the indices themselves which, at the end of the period charted here, were approximately equal to their positions in April 2003 (10-City) and July 2003 (20-City).

As I have pointed out many times, residential real estate remains an important store of value for most homeowners.  I do not advocate considering your “home” an “investment” because that can lead to the kind of piggy-bank behavior that led to the price bubble that is so apparent in these charts.  That said, even through the really significant market problems since 2007, it is still true that on average real estate has gained value over any ten year period since World War II.

Since Austin is not included among the Case-Shiller cities I have used the 12-month moving average of sale prices as a proxy.  Notice that that point in April 2011 was higher than all points to the left on that line.  Our average prices dipped a little in 2009 and 2010, but they have recovered and are on the rise again.  I expect the 12-month average to dip again in July 2011 because the period being averaged will no longer include the all-time highest point in July 2010, but the trend remains clear.

As one last comparison, consider year-over-year changes in these price indices: 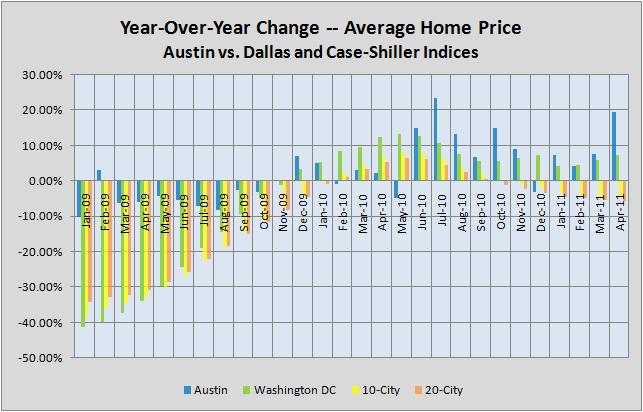 First, notice that the Case-Shiller indices have been losing ground year-to-year for several months.  For much longer — about sixteen months — both Austin and Washington, DC have been gaining.  And look at the magnitude of those gains — Austin vs. Washington!  Yes, Washington home values have appreciated more than Austin since 2000, but it would have been very easy for five of those years to pay more for a home there than the current market would yield.  Not so in Austin.

Separately, I will update my Austin Market Dashboard and elaborate on market conditions in Central Texas.  It’s not all rosy, even here, but for real estate market performance I would rather be here than anywhere else in the United States.

Many years of business experience (high tech, client service, business organization and start-up, including almost 20 years in real estate) tell me that service is the key to success and I look forward to serving you. I represent both buyers and sellers throughout the Austin metropolitan area, which means first-hand market knowledge is brought to bear on serving your needs. Learn more about my background and experience, my commitment to my clients, my profession, and to the real estate industry at CentralTexasHomeSearch.com.
View all posts by Bill Morris, Realtor »
« Austin-area building permits — signs of confidence?
Case-Shiller — May data is in »