Reported by RISMedia over the Memorial Day weekend:

As always, I was curious about how Texas and Austin stack up compared to other metropolitan areas and to the national average.  As a start, I went to the source data by MSA and charted the large cities listed in the article as the five most and five least affordable, along with Austin: 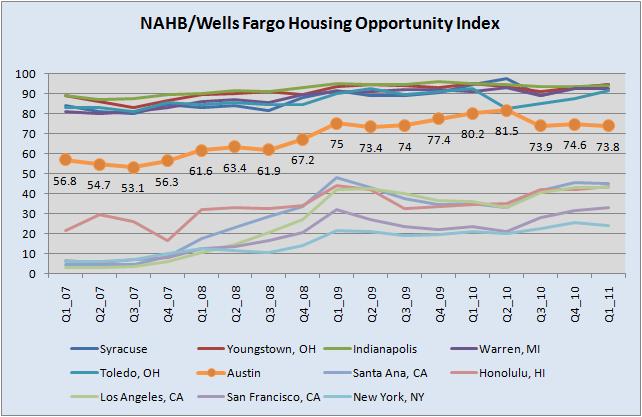 That chart shows the Housing Opportunity Index reported by the National Association of Home Builders and Wells Fargo, which measures the percentage of housing stock in a market area that is affordable by residents earning the median income for that area.  I did not include the national average on the graph, but the RISMedia article includes this summary:

“The HOI indicated that 74.6 percent of all new and existing homes sold in the first quarter of 2011 were affordable to families earning the national median income of $64,400. This eclipsed the previous high of 73.9 percent set during the fourth quarter of 2010 and marked the ninth consecutive quarter that the index has been above 70 percent. Until 2009, the HOI rarely topped 65 percent and never reached 70 percent.”

Those figures include cities of all sizes.  Austin compares well with that overall average.

As another point of reference, I also reviewed the Housing Affordability Index, which measures the ratio of median income to the income required to qualify for a 20%-down mortgage for a median priced home.  Just as with the HOI, a higher score is better for the HAI.  Here is that comparison: 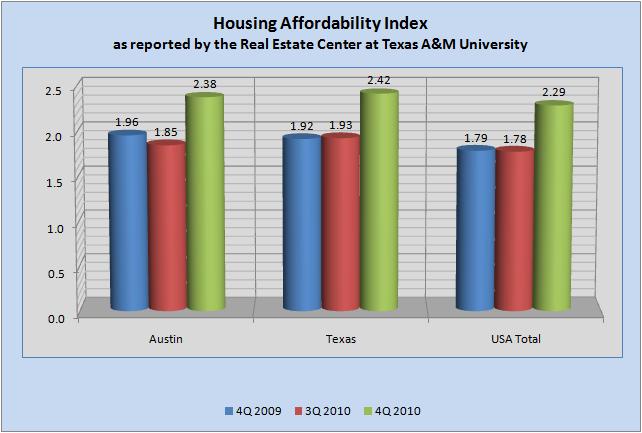 That chart obviously covers a much shorter time than the HOI graph, but it shows that since 4Q 2009 housing has been more affordable in Austin and in Texas than the national average.

An important point is needed:  There are two ways for a market area to improve on either of these indices — increasing median income or decreasing median home price.  In Austin, the median home price in March 2011 was 4.5% higher than in March 2007.  I have not recently researched changes in median income here, but there is just one way that housing became more affordable in Austin over the past several years, and all the reports on job growth and job creation in Austin support the expectation that median income is up.

I’ll have more to say later about home values around the country, but many folks in Austin and elsewhere have the impression that Austin is a relatively expensive place to live.  If you check any of the many cost-of-living calculators available online I think you’ll find that that impression is wrong.  At least as far as housing is concerned, the data discussed here places Austin very well, especially among large metropolitan areas.

Many years of business experience (high tech, client service, business organization and start-up, including 18 years in real estate) tell me that service is the key to success and I look forward to serving you. I represent both buyers and sellers throughout the Austin metropolitan area, which means first-hand market knowledge is brought to bear on serving your needs. Learn more about my background and experience, my commitment to my clients, my profession, and to the real estate industry at CentralTexasHomeSearch.com.
View all posts by Bill Morris, Realtor »
« Austin Market Dashboard – updated
Price It Right to Make More »