Last week the U.S. Commerce Dept. announced that new home sales were up 27% in March 2010 compared to February.  The surge was described as the strongest (in units) since July 2009, and the largest percentage month-to-month increase in 47 years.  That is good news.  One month does not make a trend, but a record increase coming off of a record low in February is something to celebrate.  Speculation is that much of that increase is fueled by the homebuyer tax credits that expire this month.  Time will tell how much demand that would have driven a strong summer selling season was actually satisfied over the past few months because of those incentives.

How does builders’ sales performance in the Austin area stack up?  Very well, thank you.

First, for comparison, look at the Census Bureau’s history of new home sales since 2000:

Now, here is a snapshot of new home sales in Austin over the past two years: 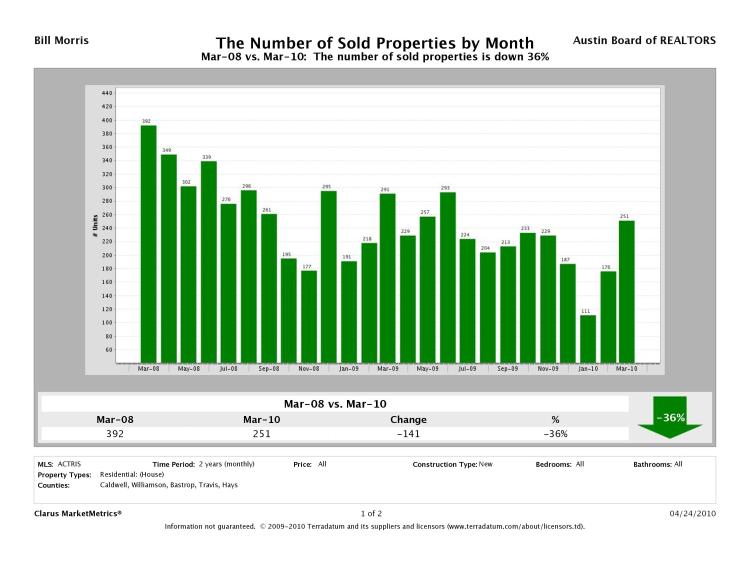 March sales were up almost 43% compared to February!  Moreover, February wasn’t our record low.  It was already up 59% from the low in January.   The shape of the month-to-month changes in Austin generally matched the shape of the curve nationwide over the past 24 months, but the magnitude of the changes nationally was much more significant.

Two other charts tell an encouraging story for the Austin area:

The number of new homes under contract has been growing since December, and last month was at its highest since May 2008.

And as a sign of confidence, note the dramatic increase in new home inventory in March 2010.

By no means is the US housing market out of the woods yet, but there are encouraging signs.  Austin and Central Texas have fared much better throughout this recession than many cities (see  BuilderOnline, The Healthiest Housing Markets for 2009), but new construction was hit hard here, too.  The next three months will tell us how much impact Spring tax incentives have had on our Summer demand, but our area was just rated very highly as a place to live and as a top-3 relocation destination (see Austin — a top choice!).   Cautious optimism here is well justified.

Many years of business experience (high tech, client service, business organization and start-up, including 18 years in real estate) tell me that service is the key to success and I look forward to serving you. I represent both buyers and sellers throughout the Austin metropolitan area, which means first-hand market knowledge is brought to bear on serving your needs. Learn more about my background and experience, my commitment to my clients, my profession, and to the real estate industry at CentralTexasHomeSearch.com.
View all posts by Bill Morris, Realtor »
« Austin — a top choice!
Another vote of confidence for Austin and Texas »