I haven’t written about Austin-area building permits since More on Housing Supply and New Construction in January 2018.  This post includes an update on permitting activity for this year as well as a couple of observations about the history of housing supply in various categories in the Austin metropolitan area.

First, here’s where we are in permitting through three quarters of 2018, with a look back to 1980:

But … the Austin area emerged from the last recession in 2012, and it was 2017 before permitting again matched the pre-recession 2006 peak.  Compare the number of newly permitted dwelling units to population growth: 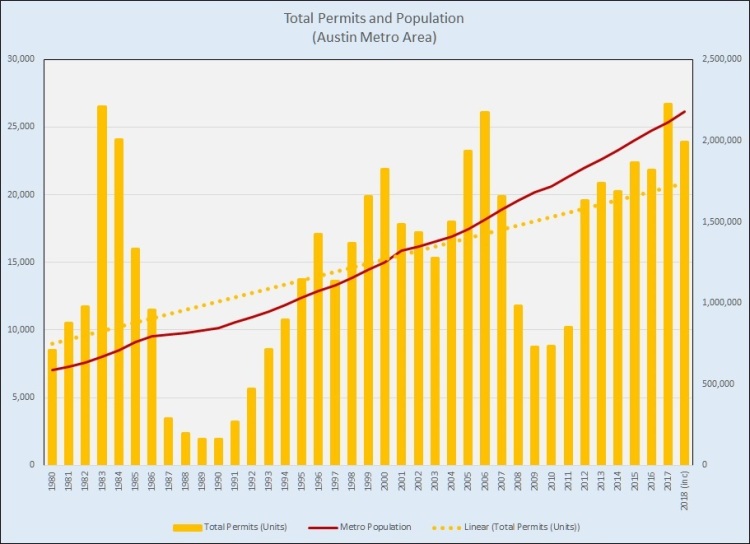 As you would expect, permitting activity declined during major market downturns — notably over the past 30 years during the savings and loan crisis in the late 1980s and after the mortgage market meltdown in 2008-9.  Confidence was not so significantly impacted by the market decline in 2001, as indicated by the much shallower dip in new building permits in 2002 and 2003.  Notice that permitting was far below population growth from 1987 through 1993 and from 2008 through 2016.  That discrepancy is at the heart of the housing shortage that Austin has experienced in recent years, but it doesn’t fully explain the affordability crisis that continues to worsen.

Notice also that permitting of 2-to-4 unit residential structures peaked in 1984, at almost 3,500 units.  In that first graph, details of the following 30-plus years aren’t discernible, so this chart will help: 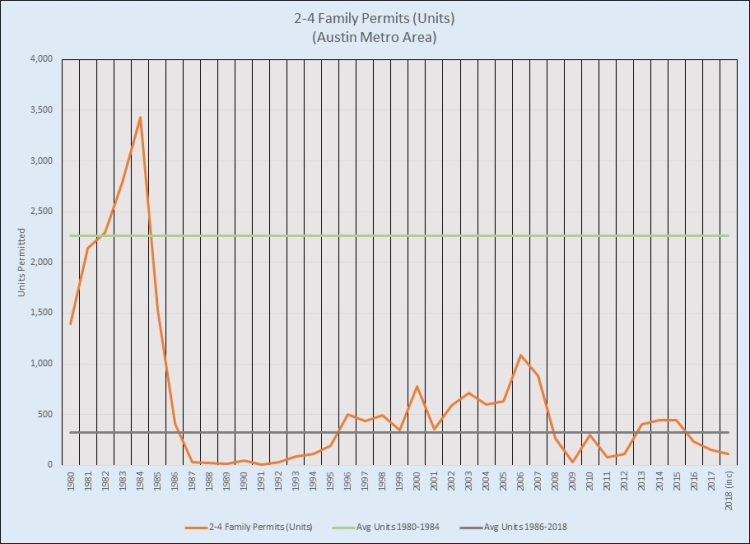 Combining both multi-family housing categories, from 1981 to 1985 they comprised 60% or more of all permits, averaging 66%.  Since 1986, permits for single family homes have dominated, representing 2/3 of all new residential activity.  That is significant, and has serious implications for housing affordability.  In this chart, note what’s glaringly missing: 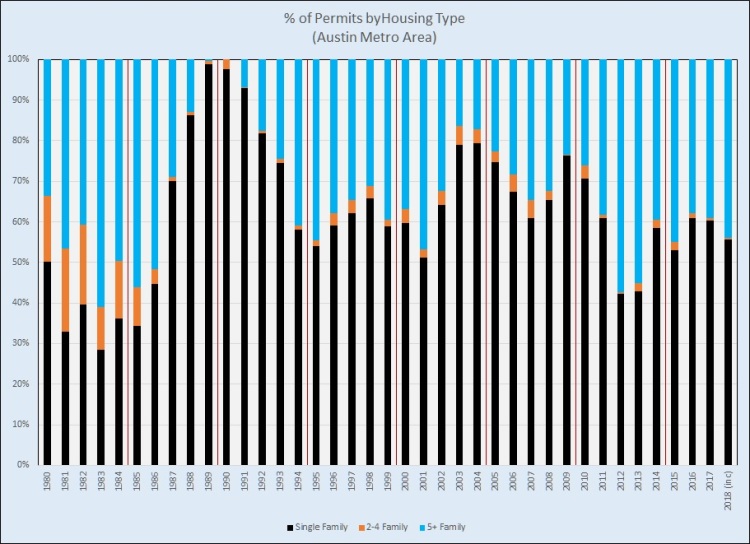 It’s no coincidence that permitting and construction of 2-to-4 family properties virtually ended in the mid-1980s.  The City of Austin adopted a new land development code in 1984 that effectively prevented all of what code consulting firm Opticos calls the “missing middle,” and when existing permits had been exhausted almost none were allowed again.  Austin’s suburbs did not pick up much of that demand, so the entire area has developed on the large lot/single house template for more than 30 years.  Even with serious affordability concerns among city leaders and influencers, here’s how residential sales in Austin have been divided so far in 2018:

Most of us have images in mind of what a duplex or a fourplex looks like, but walk or drive through many of Austin’s most treasured neighborhoods and you’ll see many examples of structures that contain two or more dwelling units and that blend beautifully into their surroundings.

More dwelling units per acre obviously can affect the cost of each unit, and especially around the periphery of great neighborhoods that can be done without changing neighborhood character, while allowing more Austinites to live where they want or need to live.  Austin needs land use policy that will allow for this kind of development in the future.  This is a conversation worth having.

More than thirty years of business experience (high tech, client service, business organization and start-up, including many years in real estate) tell me that service is the key to success and I look forward to serving you. I represent both buyers and sellers throughout the Austin metropolitan area, which means first-hand market knowledge is brought to bear on serving your needs: -- Seller Representation is a comprehensive process that begins with thorough market analysis and consultation, continues with properly staging the home to achieve the highest price possible in a reasonable time on market, a complete program of marketing and promotion, ongoing updates and communication, closing coordination, and follow-up throughout (and after) the sale. -- Buyer Representation is also full service: shopping, previewing, price and market consultation, contracting, negotiating, coordination of inspections, appraisals, repairs, and closing details, and follow-up beyond the closing of your purchase to ensure your lasting satisfaction. Because the real estate industry is becoming more sophisticated and challenging every day, you need a professional that understands the industry and is positioned to stay ahead of the game. I go the extra mile to help you achieve your goals. That's why I constantly research the market and property values so your home is priced effectively from day one. I also make sure the public knows your home is for sale by using innovative advertising and marketing techniques to attract potential buyers.
View all posts by Bill Morris, Realtor »
« Affordability and Austin-area schools
Market moving toward “normal”? »