The strength of the Central Texas real estate market continues, even given a seasonal pause in August with the start of the school year.  Listing inventory is down, representing just a 4-month supply at the end of August.  (September figures will be ready in a couple of weeks.)  Since most analysts consider 6 to 6 1/2 months’ inventory to indicate “balanced” market conditions, we are solidly in seller’s market territory:

The monthly unit sales pace is still about 20% lower than the peak of the market cycle in June 2006, but is almost 24% higher than the same month last year.

Market absorption of active listings is at its highest since the Summer of 2006: 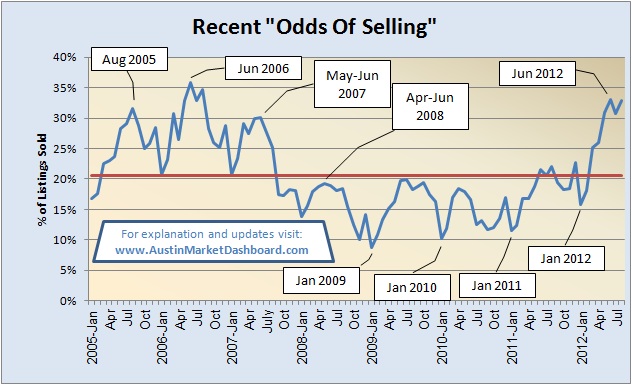 As I have noted before, “market bottoms” over the past several cycles have occurred at about 10% “odds of selling”:

The distinguising feature of this cycle was the extreme volatility, reaching or approaching that low-point four times between November 2008 and January 2011, finally showing sustained growth since then.

Sales prices have remained remarkably stable in the Austin area — certainly when compared to the few states that took the worst of the housing downturn.  Average and median prices before the downturn peaked in May and August 2008, wallowed 9% to 10% lower into the summer of 2010, then reached an all-time high in July 2010.  That upturn proved transitory and prices moved lower again until 2012:

In June 2012 both average and median prices reached new all-time highs. They have dipped a little since then, but with low inventories there is no reason to expect more than typical seasonal flattening.  Using 12-month rolling averages smooths seasonal effects, and the trend is apparent: 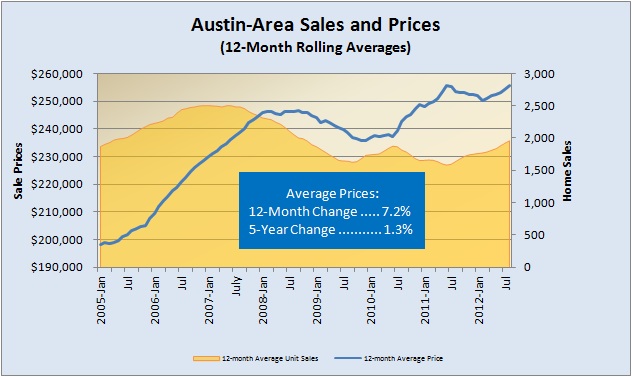 Note that the calculated changes shown in the blue inset are “averages of the averages,” so don’t get confused about annual price appreciation.  Those calculations simply indicate a smoothed view of where we are now versus one year ago, and versus the pre-recession market.

Many years of business experience (high tech, client service, business organization and start-up, including almost 20 years in real estate) tell me that service is the key to success and I look forward to serving you. I represent both buyers and sellers throughout the Austin metropolitan area, which means first-hand market knowledge is brought to bear on serving your needs. Learn more about my background and experience, my commitment to my clients, my profession, and to the real estate industry at CentralTexasHomeSearch.com.
View all posts by Bill Morris, Realtor »
« Austin #8 among BusinessWeek’s “best cities”
What price ranges are selling in Austin? »