Austin — What a great place to be!

It has been a very busy year in the Austin real estate market … so busy that I haven’t made time to write for months.  Whether I can keep up as often as in previous years remains to be seen, but for now an update on my Market Dashboard seems a fitting place to start.

For those who have followed this site, you know that I began tracking this data five years or so ago, when buyers started coming to me with a desire to buy “at the bottom” of the market cycle.  It remains true that the only sure way to recognize a market bottom is in the past.  Nonetheless, I gathered and organized a lot of data and found a fairly reliable correlation between market growth and market absorption — i.e., since 1990-91 growth cycles followed months in which a low point of about 10% of active listings sold:

Notice that after the savings and loan debacle in the late 1980s, and again in 2003-2004, following the bursting of the Dot-Com bubble along with 9/11 and the Enron/Worldcom scandals, it took two bounces off that 10% bottom before new growth cycles took hold.  Also notice how volatile the most recent market downturn has been.

Certainly, there has been plenty of economic news over the past few years, and numerous influences on activity in the housing sector.  You would never have known it from most news reports in 2007 – 2010, but the vast majority of the impact of the housing downturn happened in just five states — indeed, in less than 40 counties nationwide (see 5 Foreclosure Myths).  Among other important reasons for “unpredictable” market performance in recent years, tax incentives for buyers to purchase homes undoubtedly distorted normal seasonality and typical market forces.  Here is a look at monthly home sales and year-over-year home sales (both in units, not dollars) during this market cycle: 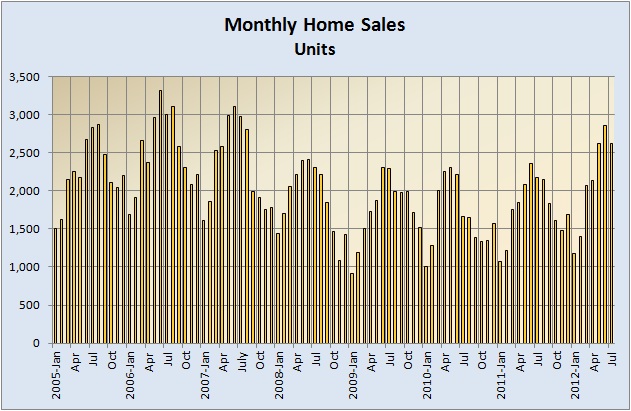 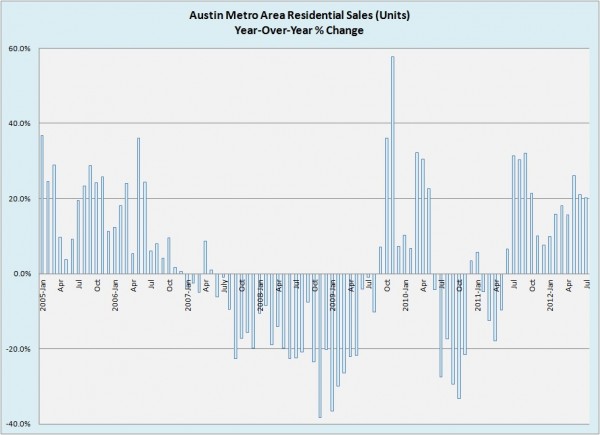 The first homebuyer tax credit program was intended to increase home sales from April 2008 through the end of that year, but it was really a “loan” that would be forgiven if the homeowner stayed long enough.  Not surprisingly, that wasn’t much incentive at all.  Not only did home sales decline from June through December, but the fall off was steeper than in a typical year.

That program was followed by a new incentive allowing those who purchased homes before December 1, 2009 to deduct several thousand dollars from either their 2008 or 2009 federal income tax returns.  You can see that that incentive extended the summer selling season by a couple of months, but really didn’t change the seasonal sale pattern, or affect annual sales significantly in 2009 compared to 2008.

In 2010, the tax credit was available for home purchases before the end of November.  The effect can be seen in the Monthly Unit Sales chart as stronger Fall 2010 sales than typical seasonality would produce.  In the Year-Over-Year Sales Change chart, the very real spike in November 2010 is visible, but by June 2011 it was clear that that spike reduced demand in the following Spring and Summer because many consumers accelerated their home purchases to Fall 2010.

Finally, 2010 included one last tax incentive program with a September 2010 purchase deadline.  Both charts above show that the effect of this last tax credit offering was minimal.

By June 2011, month-to-month sales looked much more normal, and 2012 has obviously been stronger.  July 2012 marked 14 consecutive months of year-over-year sales increases in the Austin metropolitan area.

Despite all of that artificial market turmoil, our market area never really felt the recession in a significant way: 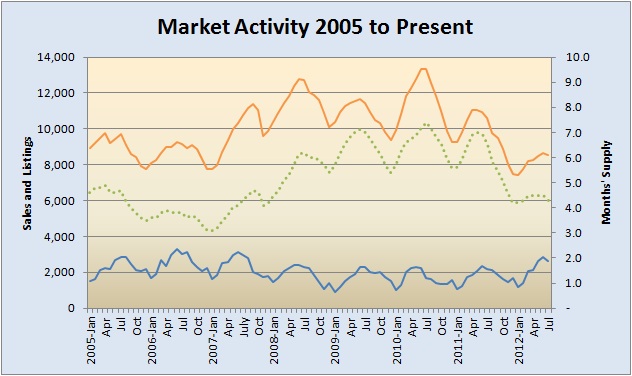 Peak inventory in July 2010 represented 7.4 months’ supply — “buyer’s market” territory but not so extreme as to severely affect sales prices (and an enviable position compared to many/most other U.S. metro areas).  In fact, July 2010 was the sales price peak as well: 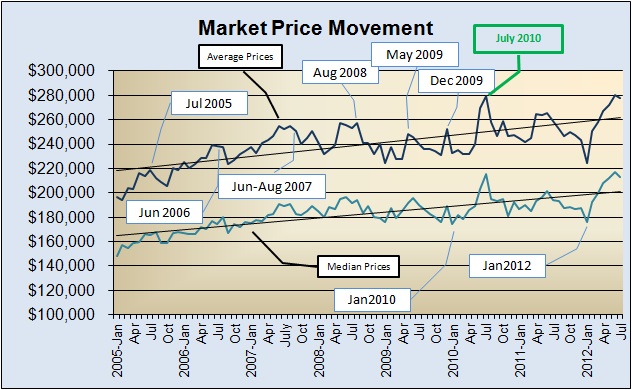 Referring back to the Market Activity chart, notice that listing inventory has been in the 4 to 4 1/2 months range this year — solidly in “seller’s market” territory.  Prospective homebuyers and their agents know that this has been a frustrating time from that side of the market, with “good” properties selling very quickly and often in multiple offers.

There is every reason to believe that we will remain in a low-inventory position through the Fall and Winter.  In addition to continuing difficulties in international economics and in the energy sector, we will see some effects related to U.S. elections in November 2012.  I won’t attempt to forecast that issue here, but in any event I expect a fairly typical Spring increase in listing inventory and buyer demand next year.

If those factors move in parallel as they have for most of the past three years, then supply will remain at or below  six months.  New construction will likely make a larger contribution than it has in recent years, but local economic growth and job creation should keep up with the pace.

I have been saying for years that mortgage interest rates can’t stay this low forever, but I don’t see any reason to expect dramatic increases over the next several months.  International economic issues continue to drive investors toward U.S. bonds, holding yields down here, and to the extent that the Fed has any influence over mortgage rates it seems unlikely that they will “tighten” monetary policy any time soon.

All of this bodes well for the Greater Austin real estate market as we enter a new growth cycle.  Austin is always a great place to be, but it is an especially good time to buy and sell homes here.  If you have been watching and waiting, now is the time to get in!

[Complete printable versions of all of my Market Dashboard charts, along with property search tools and other valuable market information are available on at www.eHomesByMorris.com.]

Many years of business experience (high tech, client service, business organization and start-up, including almost 20 years in real estate) tell me that service is the key to success and I look forward to serving you. I represent both buyers and sellers throughout the Austin metropolitan area, which means first-hand market knowledge is brought to bear on serving your needs. Learn more about my background and experience, my commitment to my clients, my profession, and to the real estate industry at CentralTexasHomeSearch.com.
View all posts by Bill Morris, Realtor »
« RE/MAX supports our military and their families
About Austin Home Prices »

2 thoughts on “Austin — What a great place to be!”