For the sixth consecutive year, Allied Van Lines reports that Texas enjoyed the highest level of net in-migration in the United States.  Especially in Austin, there are a lot of folks who view this as a mixed blessing — the growth, employment, and housing demand that comes with it are great, but it is more and more difficult to preserve the less metropolitan atmosphere that makes Austin  Austin.

That said, “it is what it is,” as they say, so I went to Allied Van Line’s source data and found the strength of Texas’ attraction even more impressive than the report sounded.  Here’s a look at inbound and outbound shipments by state:

California and Florida both showed larger numbers of shipments than Texas, both inbound and outbound.  Florida even enjoyed a net positive.  But looking at the data another way, there is no mistaking the most significant beneficiary of this continuing trend: 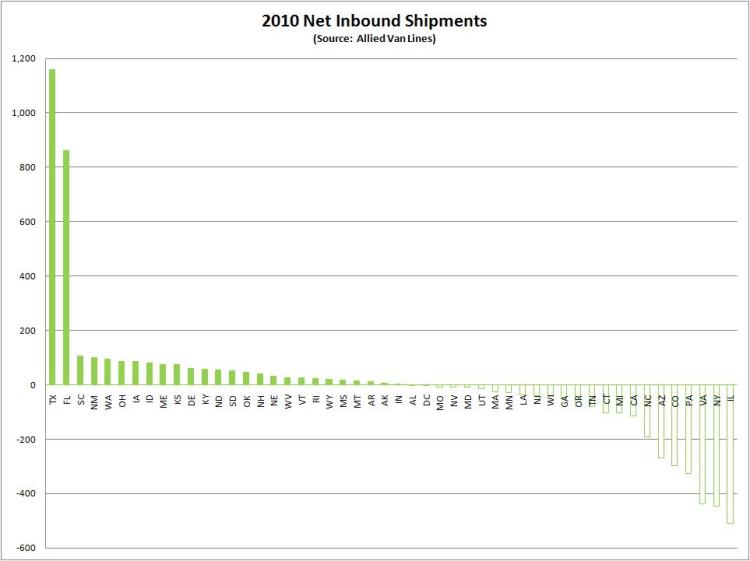 26 states show net-positive shipments on that chart.  24 were negative.  On the plus-side, the contrast between Texas and Florida compared with the other growing states is pretty incredible.  At the other end of that chart, Illinois, New York, Virginia, and Pennsylvania lost relos much more dramatically than the others.  The article linked at the beginning of this post mentions Colorado as a “magnet state,” but I don’t see that in this data.  For now, I’ll just assume that was a typo.

Again, this is the sixth year in a row that Texas has led in this report.  I’ll be watching for the same kind of information reported by city and as in the past I expect to see Austin high on the list.  This is one of the reasons that Austin and Central Texas has weathered the economic storm so much better than many other places.

Many years of business experience (high tech, client service, business organization and start-up, including almost 20 years in real estate) tell me that service is the key to success and I look forward to serving you. I represent both buyers and sellers throughout the Austin metropolitan area, which means first-hand market knowledge is brought to bear on serving your needs. Learn more about my background and experience, my commitment to my clients, my profession, and to the real estate industry at CentralTexasHomeSearch.com.
View all posts by Bill Morris, Realtor »
« 2010: BillMorrisRealtor.com in review
Austin featured on CBS Evening News 01/07/11 »

2 thoughts on “Still flocking to Texas …”