As I have noted for months, the Austin/Central Texas economy has been adding jobs while other metros were treading water or being washed backward.  An article in today’s Austin American-Statesman (Austin unemployment rate held steady last month) indicates that we broke that trend in December 2009, but the data behind that report, released yesterday by the Texas Workforce Commission deserves a quick comment.

First, here is the graph included in the Statesman: 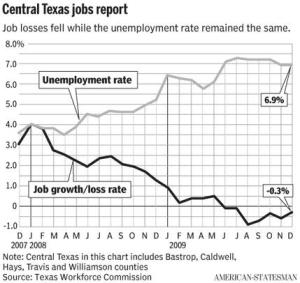 This chart requires an important note:  the “Job growth/loss rate” tracks year-over-year changes — e.g., job growth in December 2009 compared to December 2008 — and it does show a right-way trend since August.  Readers who don’t think through what that means, however, may allow fact that that line is below zero over the past several months to obscure the additional reality that we have added jobs on a month-to-month basis for most of the past six months:

Those figures are total non-farm employment in the Austin-Round Rock MSA, not seasonally adjusted, and they show that the number of jobs did contract by a little more than 0.1% last month — 900 jobs out of almost 782,000.  That compares to positive job growth in November-December in several previous years.  On the other hand, even that lower number last year was 13,100 jobs higher than in July.  As the American-Statesman article says, total non-farm employment in December 2009 was 2,300 jobs lower than December 2008, but recent trends and most economic forecasts (Austin employment picture remains positive) are optimistic.

Many years of business experience (high tech, client service, business organization and start-up, including almost 20 years in real estate) tell me that service is the key to success and I look forward to serving you. I represent both buyers and sellers throughout the Austin metropolitan area, which means first-hand market knowledge is brought to bear on serving your needs. Learn more about my background and experience, my commitment to my clients, my profession, and to the real estate industry at CentralTexasHomeSearch.com.
View all posts by Bill Morris, Realtor »
« Austin employment picture remains positive
It’s not just the city of Austin … »